It is again time for a round-up of recent competition law developments which have caught our attention.

Most attention-grabbing of all was the European Commission’s genius/bizarre/inexplicable decision to publish a comic book which is probably best described as a bureaucrat’s fantasy. A young Commission official (Thomas) starts talking to a beautiful woman (Chloe) in an airport departure lounge. Instead of ignoring his slightly creepy advances, Chloe turns out to want nothing more than to hear about the Commission’s antitrust work. Indeed, when Thomas false-modestly suggests that he might be boring her, she insists she wants to hear more: 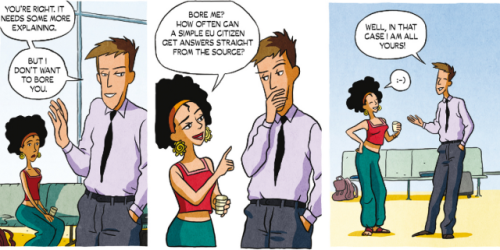 And so starts the most fascinating hour of Chloe’s life. I should thank the Legal Cheek blog for bringing this important piece of work to my attention.

Chloe would doubtless be fascinated to hear that competition laws are also enforced through private proceedings, and that there were several interesting decisions over the last court term. The Court of Appeal held in W.H. Newson Holding Limited & ors v IMI plc & ors [2013] EWCA Civ 1377 that follow-on proceedings under s.47A Competition Act 1998 may be brought for the tort of conspiracy, but only if the relevant decision contains a specific finding that the defendant intended to injure the claimant. In his blog on the case, Andrew Scott raised a reason to doubt the decision, and also pointed out that it will a rare case in which such a finding is made. In another judgment in the Newson litigation ([2013] EWHC 3788), Mrs Justice Rose held that a defendant cartelist to a s.47A claim may sue another cartelist for contribution even if the original claimant could not himself have sued that other cartelist under s.47A.

There were also a couple of interesting private law cases concerning jurisdiction. The Competition Appeal Tribunal held that a claimant can rely on Article 5.3 of the Brussels I regulation to found jurisdiction in the country where the harm occurred, regardless of whether the claimant is a “direct” or “indirect” victim of the unlawful conduct (see Deutsche Bahn AG v Morgan Crucible Company Plc [2013] CAT 18). The Court of Appeal refused permission to appeal that decision. In the same week, the Court of Appeal handed down its judgment in Ryanair Limited v Esso Italiana Srl [2013] EWCA Civ 1450 in which it considered the scope of a contractual English jurisdiction clause. Jason Pobjoy blogged on the decisions here.

Other notable private law cases included Secretary of State for Health v Servier Laboratories [2013] EWCA Civ 1234, in which the Court of Appeal upheld an order for disclosure notwithstanding the appellants’ complaints that if they complied they would potentially face criminal liability under a French blocking statute (see Tom Richards’ blog here), and Deutsche Bank AG and others v Unitech Global Limited and another [2013] EWHC 2793, which held that agreements based on Libor are not void (see my blog here). I also blogged on a Canadian case which has caused much excitement among claimant lawyers, Pro Sys Consultants Ltd v Microsoft Corporation 2013 SCC 57, which held that there is no such thing as a passing on defence.

An important theme of the last term was the right which parties have to access evidence in the course of a Competition Commission investigation. The Competition Appeal Tribunal in BMI Healthcare and others v Competition Commission [2013] CAT 24 stressed the importance of allowing parties access to documents, and required the CC to allow greater access (see Tom Richards’ blog here). On the other hand, the CC managed to bat away a similar complaint in Groupe Eurotunnel SA v Competition Commission [2013] CAT 30, and in Ryanair’s current appeal against a CC decision the CAT has refused even to allow Ryanair’s lawyers access to the full unredacted decision (see here). This is therefore a topic which is likely to see further litigation.

Several decisions touched on the question of market definition. James Segan’s blog addressed the Court of Appeal’s decision in TalkTalk v Ofcom [2013] EWCA Civ 1318 – a difficult decision which James explained on the basis that “market definitions are a tool rather than an end: what matters is substance not form”. In Chemistree Homecare Ltd v Abbvie Ltd [2013] EWCA Civ 1338 the Court of Appeal upheld Mr Justice Roth’s decision not to grant an interim injunction requiring a distributor to continue supplying a particular drug to a pharmacy business. The essential reasoning was that the drug did not constitute a single product market, so there was no real prospect of showing that the withdrawal of supply was abusive. The opposite conclusion was reached in the case of Dahabshiil Transfer Services Ltd v Barclays Bank Plc [2013] EWHC 3379 (Ch), in which money remitters won an interim injunction requiring Barclays to continue providing them with services. They succeeded at that interim stage in large part because they persuaded the court that their chosen market definitions had a solid foundation and might be proven at trial.

Finally, we continued our series of economics blogs with another guest blog from Oxera, this time Tuomas Haanperä on market squeeze. In the absence of a handy cartoon explaining competition economics, we are extremely grateful to Oxera for their enlightening series of blogs on these issues.